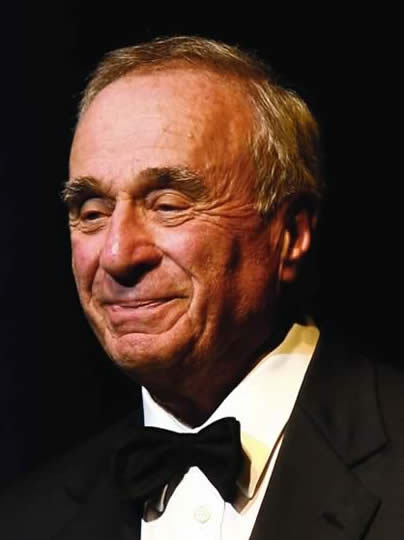 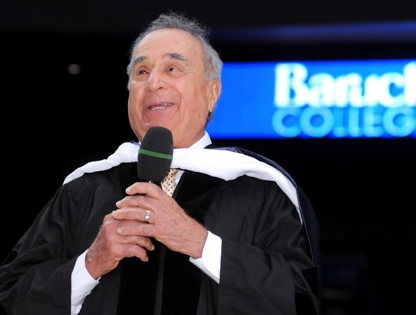 Harman was the keynote speaker at Baruch's 2009 commencement

HARMAN—Sidney: It is with much sadness that Baruch College notes the passing of Sidney Harman (Class of ’39), whose generosity and vision have transformed our classrooms, our students and the excellence of our academic programs.  Sidney Harman endowed the Harman Writer-in-Residence Program in the Weissman School of Arts and Sciences, and through it exposed thousands of Baruch College students to the wisdom and creativity of world class authors such as Edward Albee and Francine Prose. He was a member of Baruch College’s “17 Lex Society” and was awarded an honorary Doctor of Humane Letters degree by the College in 2009. Harman’s career spanned the arts, business, and public affairs like no other alumnus since our namesake, Bernard M. Baruch. He was the founder and chairman emeritus of Harman International Industries; he purchased Newsweek last year and later merged it with The Daily Beast. The former Assistant Secretary of Commerce for Technology was a generous philanthropist and a friend to the arts. He gave millions to education, the performing and fine arts and other philanthropies. His transformative gift allowed the Shakespeare Theatre Company in Washington D.C. to construct the Harman Center for the Arts.  Harman liked to quote Maxwell Anderson who wrote, “It is for our arts that we will be remembered.”  Sidney Harman will be remembered for this and much more.

A Personal Recollection of Sidney Harman

In May 2009, Dr. Sidney Harman stood on the stage of Madison Square Garden at the Baruch College Commencement, walked away from the lectern, and asked the thousands gathered in the audience: “Do you want to see what a 90-year old man looks like?” As he waved his hands in the air vigorously, the audience roared and applauded. Dr. Harman, who received an honorary degree as Doctor of Humane Letters, delivered an inspiring address on how to live a life that mattered.

If anyone knew the formula for such a life, it was Sidney Harman,who always brought to every endeavor an ability to transform the ordinary into the extraordinary. Sidney seized on the idea of endowing the Harman Writer-in-Residence Program in the Weissman School of Arts and Sciences at Baruch College in the fall of 1998 because he believed that the world needed more “poet managers.” A deep reader, he often said that “good writing is revelatory. It is not the transference of fully formed material from brain to paper. Writing,” in Sidney’s words, is “an act of magical creation: writing is discovery.”

As a proud alumnus of Baruch College, Sidney loved the idea of bringing the Harman Residency to the Baruch Campus and he reveled in the distinguished roster of writers –some 24 of them including Edward Albee, Tony Kushner, Lorrie Moore, Paul Auster, Charles Simic, Richard Price, Colum McCann—who came to Baruch as Harman Visiting Professors.  Read more

Sidney Harman, you were born in New York and have made a name for yourself throughout the world in the fields of electronics and the arts.

In 1953, you and your partner developed the first stereo receiver that combined a power amplifier, preamp, and radio tuner. Harman Kardon was born. It became a $2-billion-a-year company as one of the world’s premier makers of high-end audio and navigational systems.

A favorite quote of yours is from Maxwell Anderson who wrote, “It is for our arts that we will be remembered."

Through the Harman-Writers-in-Residence Program, you have exposed thousands of Baruch College students to the wisdom and creativity of world class authors such as Edward Albee, Lorrie Moore, Charles Simic, Francine Prose, and Paul Auster.

Your generous gift allowed the Shakespeare Theatre Company in Washington D.C. to construct the Harman Center for the Arts. The theatre company's chief development officer, Ed Zareski called you "the most thoughtful and intellectual of any philanthropist I have met."

When you were named Assistant Secretary for Technology in the U.S. Commerce Department, you sold your interest in your company. However, your love of your company led you to buy it back piece by piece once you left public service. You are now the executive chairman of Harman International Industries, Inc.

"We can not legislate conscience," you wrote in your book Mind Your Own Business, A Maverick's Guide to Business, Leadership and Life.

You demonstrated your conscience in many ways throughout your career, including the Quality of Working Life Programs initiated at your company's plants. Read more